This past February, thirty school teachers, naturalists, and community educators gathered at the UW-Madison Arboretum to learn about effigy mounds in the Madison area. Madison residents may be aware that the four-lakes area, known as Teejop/Dejope in Ho-Chunk, is rich with effigy mounds, but may not know anything more about the history of these earthworks, or the many ongoing efforts to protect them. Educators in this Urban Indigenous Arts and Sciences session were eager to learn more, expressing the desire to acknowledge Indigenous land history and teach about mounds while maintaining cultural accuracy and authenticity.

Bill Quackenbush, Tribal Historic Preservation Officer for the Ho-Chunk Nation, guided the group throughout the morning session. An experienced educator who has worked with many diverse audiences, Bill wove together teaching about Ho-Chunk language, culture, kinship, clans, and history as a context for thinking about mounds and how we each might relate to and care for them. Acknowledging the importance of the season, Bill described winter as a good time to rest, to talk with one another, and to let the earth rest as well as it recharges and prepares for new growth in the spring.

Winter can also be a good time for invasive species removal, since the frozen ground protects the integrity of the soil as people walk and work on it. Marian Farrior, UW Arboretum Restoration Work Party Manager, gave plant identification basics and demonstrated various techniques for species removal. Marian spoke from many years of experience working with volunteer groups of all ages, and starting in 2016 she has coordinated with Bill and Earth Partnership to bring Native youth from the Madison AISES (American Indian Society for Engineering and Science) program to the Arboretum to remove invasive species on and around effigy mounds located there. In this particular section of the Arboretum, the goal is simply to increase the ecological health of the site and make it possible for tribal Elders to visit. The restoration work takes place in the middle of the woods, with no paths or markers announcing the location of these mounds.

There is not a one-size-fits-all approach to site management or education with mounds. Bill described another good strategy for protecting mounds: letting trees grow up around them and providing natural shelter and competition for would-be invasives. For mounds that are located in open parks or schoolyards, other management tools such as cutting or burning may need to be considered. Regardless of the approach, it is a vital first step for anyone working on sites with mounds to consult with the Ho-Chunk Nation, and Bill is a great first contact as Tribal Historic Preservation Officer. Whether it’s developing or updating a site management plan, organizing restoration work, or simply verifying that the mound is catalogued and protected, engaging the Nation’s expertise and cultural wisdom throughout the process is key.

Mounds are sacred sites, and as the descendants of the builders of the mounds in this area, the Ho-Chunk lead efforts to protect them. A recent high-profile case involving a Madison-area gravel quarry and proposed legislation in the State Assembly to weaken mounds protection brought many Ho-Chunk and other Native activists, along with allies, to protest at the state capitol. Their efforts have resulted in those mounds staying so far untouched. But as conflicts arise, it is critical that all Wisconsin residents understand that effigy mounds are part of this region’s history and current cultural landscape, and are entitled to the same respect that burial sites or works of art from any culture should receive. A fundamental goal of Indigenous Arts and Sciences is that educators and young people grow in their understanding the sovereignty, history, and cultures of Native Nations. Learning about and protecting earthworks may be an important part of that journey towards a more respectful and equitable future.

Thank you, pinagigiwi to Bill Quackenbush for an enriching presentation and to Marian Farrior and the UW-Madison Arboretum for hosting this event!

Groups around Wisconsin are doing the kind of mounds advocacy and protection work described by Bill Quackenbush and the Ho-Chunk Nation. Read on for an illustration of what that work has looked like with Native youth from the Wisconsin AISES program in Madison. 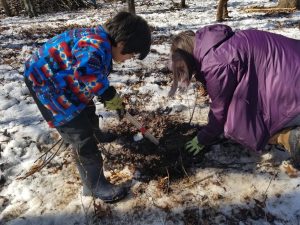 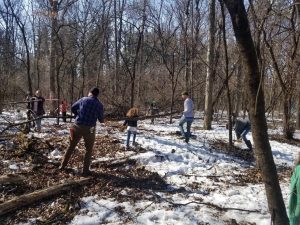 A partnership began with Earth Partnership and the local Madison American Indian Science and Engineering Society (AISES) to work on effigy mounds restoration dating back to 2010. The mission of AISES is to increase American Indians in science, technology, engineering and math (STEM). For this particular project, the idea was to get American Indian students engaged in environmental sciences. Rachel Byington, former Title VI (Indian Education) Instructional Resource Teacher for the Madison Metropolitan School District and institute participant worked with AISES Coordinator Denise Thomas and Earth Partnership to create a service learning experience in mounds restoration.

Caring for the mounds is a way for kids to engage with their cultures and provide them with an opportunity to give back to their community. The original work began on the Wingra Mounds with the help of Fawn Youngbear-Tibbetts. Work parties cleared invasive species in 2010 and 2011. That first year it was hot, muggy and full of mosquitoes but the group managed to get some work done. 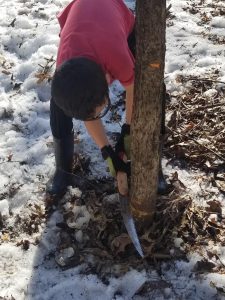 For year two, they moved the work to the spring and had better working opportunities. After invasive species management, AISES students toured Longenecker Gardens and learned about identifying trees and measuring their height and how to use GPS. In addition to learning about the cultural significance of the effigy mounds but also policies set forth by the Native American Graves Protection and Repatriation Act.

The Earth Partnership and AISES collaboration continued with mounds restoration in the 2015-16  and 2016-17 school years. Under guidance from Bill Quackenbush, the work moved to the Lost City on the Vilas Mounds. According to Bill, traditionally the young warriors would come to the site every year and clear it out.

Today, the mounds are overgrown with invasive species, primarily buckthorn and honeysuckle, which are widespread in much of the Arboretum and throughout Madison. Yet over the course of several years, the AISES group has cleared out a lot of brush, 84 feet in 2015 alone, according to parent Mercedes Krause. Working on the mounds has also given students an opportunity to learn real world math skills.

EP Indigenous Arts and Sciences partners with AISES, now under the direction of Tara Tindall and Kelli Miner, to involve Native students and families in the important work of removing invasive species in mounds groups located in the Arboretum. The last work party was this month, on a mound that is almost three hundred feet in length. The goal is to remove invasive species that are both growing in the mound as well as making a clearing around it of 25 feet. There is much work to be done, and students and parents alike look forward to continuing the work!